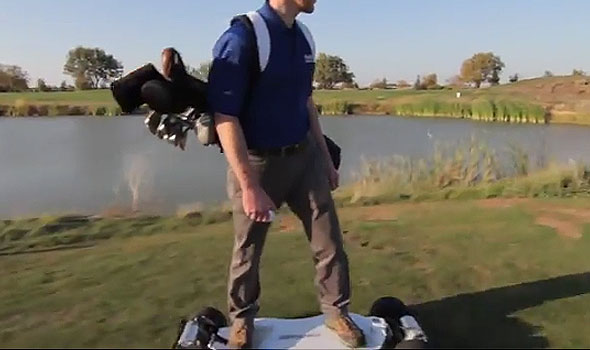 A revolution is underway at the Legacy Golf Club in Lakewood Ranch that lets golfers "surf the turf." It's called 'GolfBoarding" and it's the latest golfing craze thanks to the invention of the "GolfBoard" by Don Wildman, who created Bally Total Fitness, and Laird Hamilton, a well-known professional surfer.

For those invested in the golf industry, the hope is that the trendy machine that resembles a giant skateboard on wheels will attract more young players and revitalize excitement in the game.

The GolfBoard was named new golf product of the year in 2014 and is taking the greens by storm.

"It is a blast. I'm telling you", says Legacy Golf Club General Manager Kevin Paschall. "We've had people from 16 to 85 already trying it out."

GolfBoards have a stability bar with a switch, and a high-tech suspension system for a smooth ride. Turning is accomplished by shifting your body to the direction you want to go - much like skateboarding and snowboarding.

Obviously, these new machines do not come without safety concerns. So, how do you learn how to safely operate a GolfBoard and reduce your chances of getting hurt? Before you can set out on your GolfBoarding adventure at the Legacy Golf Club you must complete a training session and sign a waiver which says the Club is not responsible for any accidents or injuries.

In addition to keeping our readers informed about safety issues, Heintz & Becker is always looking for new developments to share information about. The GolfBoard is the most exciting development to come to golfing in years and we are excited that our local Legacy Golf Club is taking the lead in making GolfBoards available to its players.

Whether you are adventurous enough to try GolfBoarding or prefer the traditional comfort of a golf cart, the injury attorneys at Heintz & Becker remind you to make safety a priority at all times.